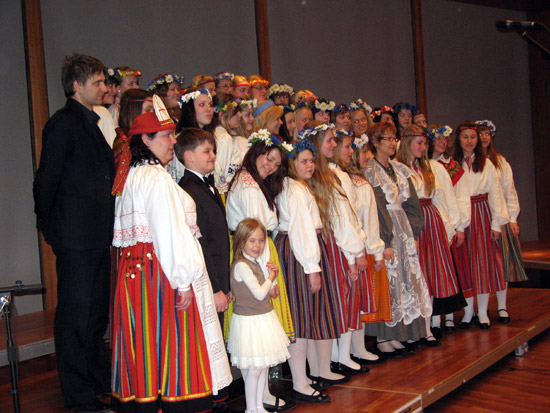 The kannel, a plucked zither 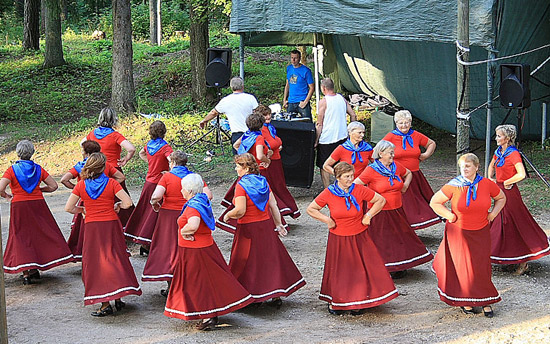 The Estonian love of choral music goes back to the very earliest village music, where group singing accompanied dance and seasonal rituals. Today choral singing is of immense importance as a folk and popular form, as political statement, and in formal composed music.

A unique kind of group singing found in Estonia is the swing song. Swing song melodies ascend and descend in half steps, imitating the rising and falling rhythm of a swing. Swing songs are sung in a different style from other runic songs, with a strong chest voice, making much use of melisma and vocal ornaments. The swing song originally had a magical function: it was believed that swinging in the spring would help crops grow and keep the cattle healthy.

The best-known Estonian composer is Arvo Pärt, whose compositions are performed around the world. Pärt, like the American minimalists with whom he is often compared, sought to strip music down to its basic components and rebuild it. He developed a compositional process he called tintinnabuli, based on the overtone series.

Pärt is not known for using Estonian folk material in his compositions. His settings of sacred texts are in Latin or Old Church Slavonic rather than Estonian. But he shares the national love of choral music, and many of his best-known compositions are for massed voices.

Veljo Tormis, perhaps the most beloved composer in Estonia, is famous for his choral works based on Estonian folk songs. “To explore the choral music of Tormis is to explore the heart and soul of the Estonian culture and singing tradition,” say the anonymous authors of the Tormis website. In Forgotten Peoples, a work for chorus, each section is sung in a different minority language—Votic, Livonian, Karelian, and Izhorian.

Musical Gathering of the Tribes

The importance of folk music and song festivals to Estonian music can scarcely be exaggerated. It sometimes seems as if Estonian national consciousness is a music festival itself.

The annual festival in Viljandi, in southern Estonia, is the biggest. For four days it features folk music from around the world. Other festivals focus on fiddle, accordion, or bagpipe.

Then there are the laulupidu, song festivals with massed choirs singing traditional and national songs. The audience sings along too—an essential feature of the festivals. The laulupidu break down the barriers between performer and audience, and help create national and community cohesion—there is a tremendous power in 10,000 to 20,000 Estonians singing together. This power was brought to bear on the Soviet occupiers in the Singing Revolution between 1987 and 1991, when Estonians from all walks of life gathered by the thousands to sing in public the patriotic and national songs that had been forbidden by the Soviets.

Traditional dance remains very popular in Estonia, in spite of its association with official Soviet culture. The older dances were circle dances, often danced to singing, as in many European folk cultures. The steps were simple and restrained. Weddings were always an occasion for dancing, and circle dances survived as a wedding custom.

European couple dances such as the schottishe, the polka, and the waltz replaced the older dance forms in the 19th century. As with the older instruments and songs, however, there has been a revival of interest in the circle dances.

Exponents of the Traditions

Performers of traditional music in Estonia are beyond counting. One of the earliest and best folk groups is Leegajus, led by Igor Tonurist, himself a noted kannel player. They perform dance songs, swinging songs, love songs, and fiddle, kannel, and bagpipe dance music. Another exponent of traditional music, Leigarid, formed during the Soviet period in 1969, is still performing Estonian folk song and dance.

There are many superb performers in the classical music tradition. Notable is choral conductor Tonu Kaljuste, who has promoted the works of composers using Estonian folk song in their works.