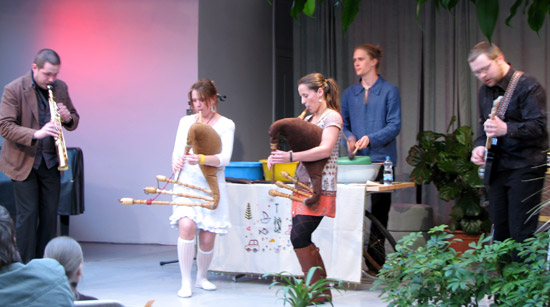 Even in the Soviet period, young Estonians kept in touch with rock-and-roll developments in the rest of Europe. Current Estonian rock follows trends in Western Europe, especially England. Metal continues to be popular, and some groups have tried to develop music with specifically Estonian content.

A recent development that parallels similar trends in other parts of Europe and elsewhere has been the rise of hybrid ensembles that use folk material in new ways, combining Estonian folk tunes and instruments with rock, jazz, or new music.

Folk-metal band Metsatöll uses traditional instruments in its performance, as well as electric guitars and drums. Its songs are based on medieval Estonian history, and use many archaic Estonian words.

The group Ro:Toro consists of two Estonian bagpipers, a soprano sax player, an electric guitarist, and a water drummer. They expand the tonal and melodic scope of traditional Estonian folk music without losing the essence of it.

Kirile Loo sings ancient runic songs from the Setu region. Her self-identification as a witch may inspire skepticism for some, but her knowledge of the folk material is genuine and her strong voice and spare arrangements incorporating nature sounds and traditional instruments are compelling.

An especially Estonian blending of the old and the new is the “punk laulupidu,” or punk song festival, where enormous Estonian choirs sing punk rock songs, joined by thousands of audience members (including, in one case, the president of the country). Seeing 20,000 Estonians belting out “Anarchy in the UK” is an unforgettable experience.