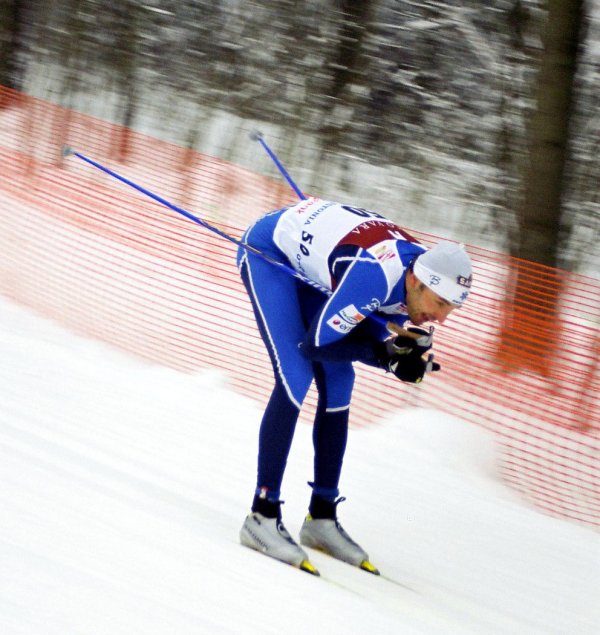 Andrus Veerpalu is regarded as the most successful skier in Estonian history. 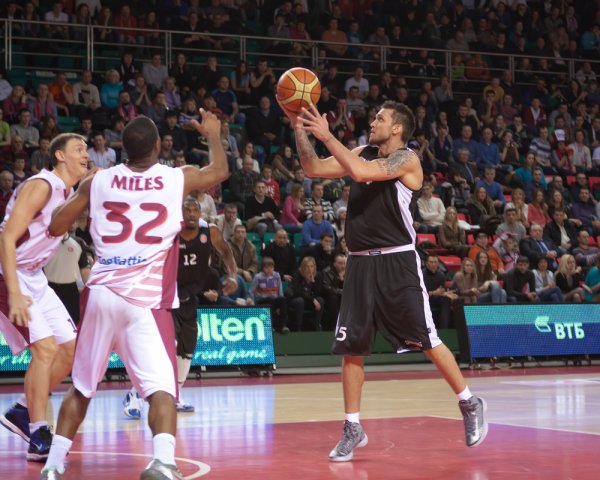 Basketball player Armands Skele of BC Kalev prepares to shoot. 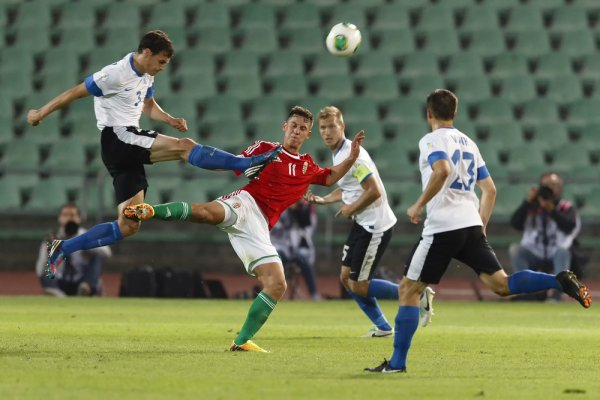 The national soccer team (in white) at a World Cup qualifier; for many Estonians the sport evokes a strong feeling of nationhood. 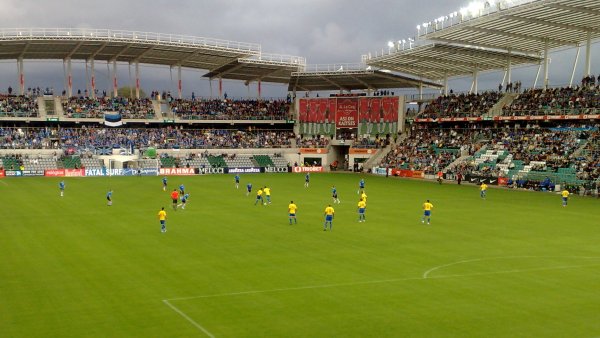 View of the A. Le Coq Arena in Tallinn, home of the Estonian soccer team and FC Flora 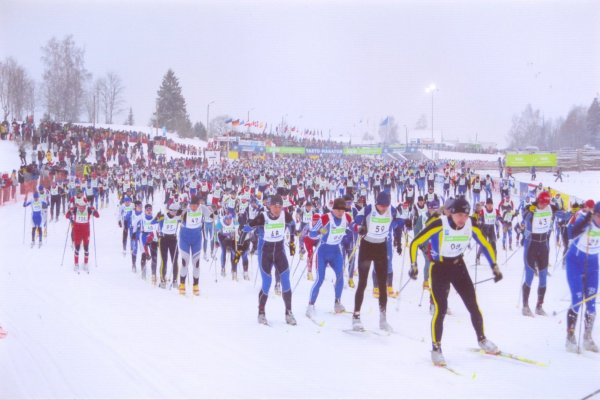 Skiers from all over the world participate in the annual Tartu Marathon. 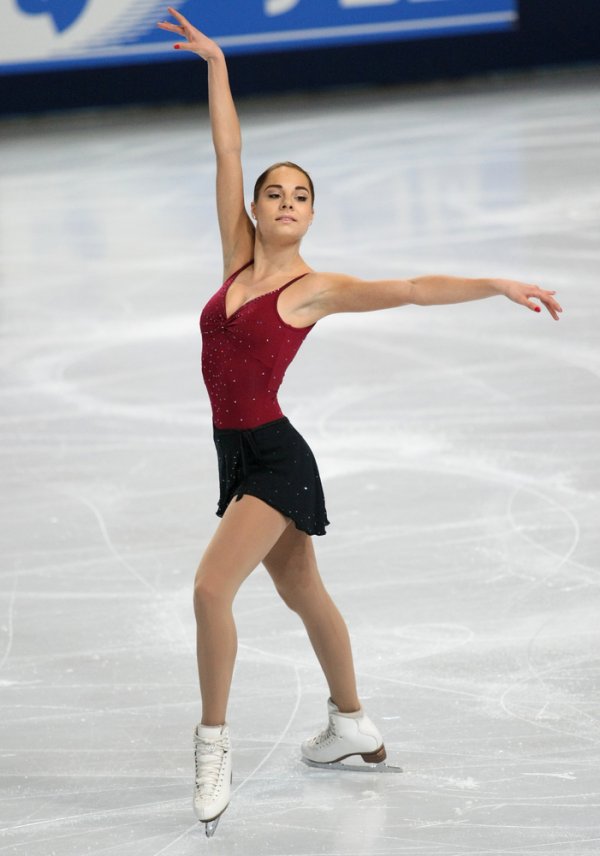 Jelena Glebova has earned five international medals and seven national titles in figure skating; the sport is popular with many Estonian women.

A game of street basketball in the center of Tallinn 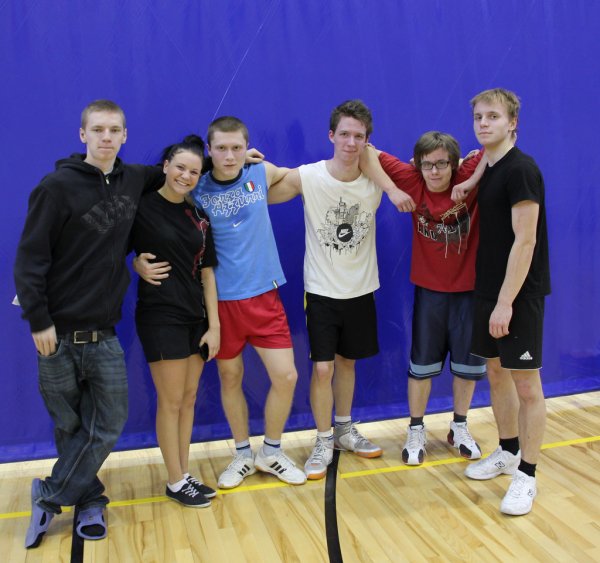 A basketball team pauses to take a group picture; the sport is also well-liked by many Estonian youth.

Estonians love sports and take pride in their athletes’ accomplishments on the international scene. Cross-country skiing is the most popular winter sport. The most popular ball games are basketball and football (soccer). Many people enjoy canoeing, hiking, sailing, motor sports, and cycling in their leisure time, and rollerblading has gained a following in recent years.

Estonians see personal fitness as important and take up activities such as horseback riding, cross-country skiing, and boating during their leisure time. They also go to health clubs with fitness facilities to keep themselves fit and healthy. Swimming, jogging, running, and aerobics are some of the most common fitness activities.

Popular sports include swimming, horseback riding, canoeing, cycling, tennis, badminton, football, Frisbee, volleyball, and basketball. Of these, basketball is the most often played. Both men and women like to go to public health clubs that have body-building facilities. Aerobics is popular among women, and judo is becoming a favorite with men. In winter, skiing and cross-country skiing are popular.

Kääriku Leisure and Sports Center
Kääriku 67301
Otepää Rral Municipality
Valga County
Estonia
The popular Kääriku Leisure and Sports Center was set up in 1947 by the University of Tartu as a study and training center for the Faculty of Exercise and Sports Sciences. It includes facilities such as a sports hall, track and field stadium, skiing stadium, sauna, hiking trails, roller skating and cycling tracks, courts for ball games, and an open-air swimming pool. It offers opportunities for conducting seminars and training and sports camps. It is an ideal place for students and professional athletes from surrounding countries to undergo training. Holiday homes, hotels, conference and catering centers are some of the other facilities offered.

Arctic Sport Club
Ehitajate tee 114b
13517 Tallinn
Estonia
The Arctic Sports Club has modern sporting and fitness equipment that caters to the needs and demands of high-rank players. Many activities are available for children and teenagers. One attraction is the bowling club, which is used for children’s parties as well as professional tournaments. Special facilities are provided for disabled people wanting to partake in sporting and fitness activities. The gym is divided into two sections: one with exercise equipment, free weights, barbells and dumbbells, and the other with "cardio theaters," that allow people to watch TV while they exercise.

Jeti Ice Arena
Suur-Sõjamäe 14b
11415 Tallinn
Estonia
Everyone from kids to professional ice skating athletes can enjoy skating at the Jeti Ice Arena. Classes on physical education are conducted here to spread awareness about fitness and health. This is the only club in Tallinn that provides facilities for the Olympic sport of curling.

Tulbi Spordiklubi
Tulbi 6
Tallinn 10612
Estonia
The Tulbi Spordiklubi offers plenty of facilities for exercising and body building. It has up-to-date and safe fitness and sports equipment and employs training coaches who help members to achieve their desired goals in fitness and sports. It is located in the center of Tallinn and has a guarded parking lot for members.

Saue Moisatall
Pärnasalu 38
76505 Saue
Estonia
Saue Moisatall is a riding club set up in 1996. Horse riding services are located in an outbuilding of the manor, which is several hundred years old. This club organizes the Saue Manor Riding Championships every year.

The Tallinn College of Engineering (TCE) is the founding member of the Academic Sports Federation (EASF) and has its own Center of Sports. The aim of the EASF is to enhance the sports movement in Estonia. The Mustamäe campus includes a sport hall and stadium that includes a full-scale soccer ground and race courses.

Professional sport receives a lot of importance in Estonia. Many Estonians excel in sports such as basketball, hockey, and football (soccer). Many foreign football teams have Estonian members, and football evokes a strong feeling of nationhood, as was witnessed when the Estonian team beat the Russians in 2002.

Estonians enjoy cross-country skiing, and the famous athletes in this sport are Andrus Veerpalu and Kristiina Shmigun. Allar Levandi is another skiing legend who was declared the Estonian sportsman of 1988 for winning a bronze medal at the Calgary Olympic Games. Jaak Mae took the second place at the 2003 World Nordic Ski Championships in the 15 km classic style event and won a bronze in the 2002 Salt Lake City Olympic Games. During the 2006 Winter Olympic Games, Estonians came out as the major winners.

Out of these the main sports team is the FC TVMK, whose main rival is FC Levadia. The other rival is FC Flora. FC Flora's main rivals are FC Levadia and FC TVMK. All three are from the Estonian capital city of Tallinn.

FC TVMK is an Estonian football club, based in the capital city Tallinn. They share their home ground with one of their biggest rivals FC Levadia, both of whom play at the Kadrioru Stadium. Their other rival is FC Flora.

Meistriliiga (Major League) Soccer
Date: March to November
Location: Venues throughout Estonia
Description: Meistriliiga season begins in March and ends in November. Ten clubs compete for the soccer championship, each team playing the other teams four times each. Six of the teams are professional and the rest are non-professional. In each season, the team that scores the lowest is removed. The team that wins the Meistriliiga championship goes to the first qualifying round of the UEFA (Union of European Football Associations) Champions League. The team which comes second gets to play the first qualifying round of the UEFA Cup.

Estonian Cup (Soccer)
Date: Ends in May
Location: Venues throughout Estonia
Description: The Estonian Cup is a significant football (soccer) cup competition in which all the football cup clubs participate. This is a knockout or single elimination tournament. The team which wins this cup gets to play in the 1st Qualifying Round of the UEFA Cup along with the runner-up of the Meistriliiga.

Esiliiga (Soccer)
Date: April to November
Location: All over Estonia
Description: This second-level league of ten teams is organized by the Estonian Football Association. Play begins in April and lasts until the end of November. All the teams play four times, and the team that wins is promoted to Meistriliiga. The team that finishes second is chosen for playoff against the ninth team of the Meistriliiga.

Tartu Ski Marathon
Date: February
Location: Tartu
Description: Tartu Ski Marathon is part of the Worldloppet series. The event was first organized in 1960, and since then its popularity has been increasing. Now, thousands of skiers from all over the world come to join in this event every year. In addition to the main 63 km race, this program also includes a 31 km short race. Other events in this program are the Open Track and Women's races, held a week before the marathon, and TILLU and MINI races for children held on the eve of the marathon. A 16 kilometer women’s race is also a part of the Open Track event.

The Elion Estonian Cup (Cycling)
Date: May to September
Location: All over Estonia
Description: This is a bicycle marathon race conducted by the Pro Cyclists Club and local sports clubs according to ECU (Estonian Cyclists Union) and UCI (International Cycling Union) regulations. There are three races in this event: the main race, the hiking race and the children’s race. The main race covers 50 kilometers. The hiking track is around 30 kilometers. There are men’s and women’s categories in the main and hiking races.