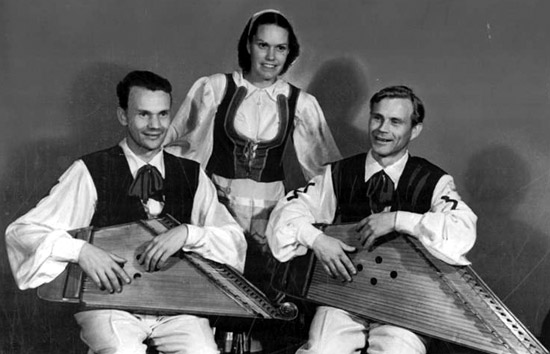 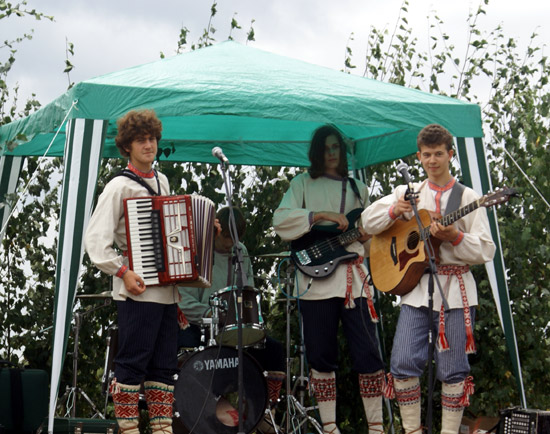 The accordion is called a lõõtspill in Estonian. 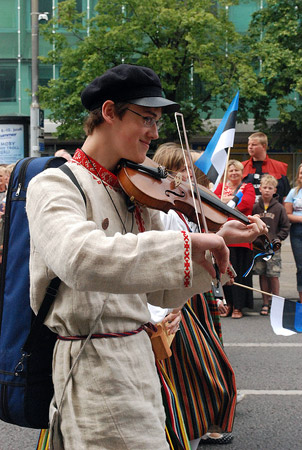 Estonian fiddle music is played mostly for dancing. Its style is simple and rhythmic, using many double stops and droning on open strings. A common practice is for a second fiddler to provide drone or chordal accompaniment.

Fiddlers began to replace bagpipers in the 19th century, and they inherited many tunes from the bagpipe repertoire. Fiddlers also inherited the bagpipe’s importance to dance and social occasions of all kinds. Some Estonian fiddling imitates the sound as well as the repertoire of the bagpipe—hence the droning and pipe-derived ornamentation.

One of the oldest surviving instruments in Estonia is the kannel, a type of zither found in the Baltic countries and in Finland. The oldest form of the instrument, which is held in the player’s lap, has five strings on a flat, hollow body. These old-style kannels are still played; more recent kannels have added strings. Both the form of the instrument and the playing style have been strongly influenced by players from Finland, where the ancient instrument (in Finnish, kantele) and its music have been more developed.

The Estonian word for bagpipe is toropill. Estonian bagpipes have a cylindrical chanter with six finger holes, a single-tongued reed, and from one to three drones, also single-reeded. The drones rest on the player’s knee. The bag is traditionally made from a seal’s stomach in coastal districts; inland pipers used dog or goatskins, sometimes with the fur left on and turned outward.

The first written record of bagpipes in Estonia dates to the 16th century, but they were most likely introduced long before, possibly from Sweden. The instrument nearly disappeared in the early 20th century. After World War II, according to folklorists, there were no more than 10 pipers left in all of Estonia. By 1970 there was only one. Now there are hundreds of pipers and several bagpipe makers.

The accordion, or lõõtspill in Estonian, is very popular. Instruments are manufactured by Estonian makers, and a national style of accordion making has developed. The repertoire includes traditional folk song and bagpipe tunes, as well as more recent dance music. Some players have begun playing recently composed art music on the piano accordion, and have introduced the instrument into experimental music contexts.

Parmupill (jaw harps) are simple instruments consisting of a metal tongue in a frame, which is held in front of the player’s mouth. The player plucks the metal tongue to sound the fundamental note while changing mouth shape to emphasize certain overtones. Simple dance melodies with strongly marked rhythms can be played in this way. Lately there has been a revival of interest in traditional jaw harp music.

Simple homemade instruments were associated, as were many songs, with shepherds and sheep herding. Pajupill (overtone flutes), traditionally made of willow bark, were played by manipulating overtones with varying breath pressure and closing and opening one end with a finger. Reed pipes (kõrrepill and roopill) made of straw or cane were also played. Shepherd’s trumpets made of rolled bark were used for signaling rather than music. The large shepherd’s trumpet karjapasun was often hollowed out of a tree branch, and could be up to six feet in length. Small trumpets were made from cow horns with finger holes cut in them. Simple tunes could be played on these horns. Folk rock groups have used these simple shepherd’s instruments in surprising musical contexts.

The Setu of southern Estonia preserve very old songs and dances no longer found in the rest of the country. Setu choral singing is polyphonic, unlike that in the north. Leelo, a kind of call-and-response singing, with the leader improvising verses and the chorus answering polyphonically, is very popular. The Setu are also known for their distinctive costume, with colorful embroidery and large, elaborate silver necklaces and brooches.