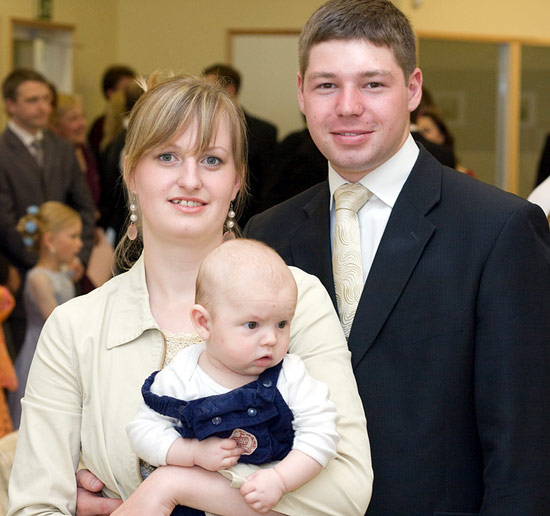 The typical Estonian household generally consists of a father, mother, and one or two children.

Estonian families are generally small and close-knit, and the central focus of social life. The extended family members usually live separately but visit frequently. The typical Estonian household generally consists of a father, a mother and one or two children. Sometimes a grandmother or grandparents also live with the family. While the domestic unit varies, the traditional nuclear family remains the basic unit of social structure. Single-parent families are increasingly common among Estonians.

Although children are important, some Estonians choose not to have children, and this is accepted by society. Among couples that choose to have children, there is not much preference for boys over girls, and gender order is not important in families with more than one child.

Abortion is available on request, but girls under the age of 16 require parental consent to terminate pregnancies. The law stipulates that abortion should be done in licensed institutions. Many Estonian women use abortion as a principal method of family planning; there is no stigma attached to having an abortion in Estonia.

Mothers generally look after very young children. Women who choose to go back to work when their children are small often enlist the help of a mother or mother-in-law to look after a small child. School-age children are sometimes expected to look after themselves between the time schools lets out and their parents return home. Both parents participate in making decisions that affect their children, and most often both parents contribute to the family income.

Estonian children may take care of some household duties and help their parents with shopping, cleaning the house or apartment, and looking after pets. In rural areas, children are expected to help their parents with the farm work. A child’s primary responsibility, however, is to go to school. Most parents work, and children may spend some time in their afternoon with grandparents or on their own doing schoolwork or playing. Families often do not share formal meals during the week when time is limited, but meal sharing is a common activity on weekends. Typical leisure activities for an Estonian family may include watching TV, going to the theater or movies, gardening, and visiting relatives.

Divorce is common in Estonia. Second and third marriages are quite usual as well. Estonian family law gives both parents equal custodial rights after a divorce, and courts generally award mothers the custody of their children.